One of the first Tinfish Press books I fell in love with was Composite Diplomacy, by Thai writer Padcha Tuntha-obas.

I loved it so much I reviewed it in 2007.The last paragraph of that review reads:

Tuntha-obas brings into dialogue the disparate, linguistic materials of Thai and English; within this “diplomacy”, neither language dominates. Instead, each language functions as both matrix and reinforcement at variable moments, equally expressing their potential for song. In composite. diplomacy., Tuntha-obas creates a “composite poetry” as elegant and complex as the natural composite materials of wood and bone.

I then sought out more of her work and found a copy of her full-length book, Trespasses. Read it, loved it, reviewed it here. The first paragraph of the review sums up why I was so enthralled with her work:

Padcha Tuntha-obas’s trespasses belongs to “much more / than what’s to be / in one place”. The poems trespass “normative” poetic borders to claim an interstitial territory of their own. Within this “debordered” space, the interplay of Thai and English opens our imaginations to the experience of being in-between languages, cultures, and forms.

Sometime in 2008, I received an essay from a mixed race Thai-American writer named Alysha Wood, a graduate of Naropa University’s M.F.A. Writing and Poetics program. The essay was titled “Across and Between: Translation as strategy within the work of Padcha Tuntha-obas and other poly-lingual texts.”

“A text that negotiates between multiple languages and scripts is a borderland. It is a landscape mapped with intersections, crossroads, and borders raw with constant friction. By coming into contact with another, a language transforms into a political territory cross-pollinated by tourism, exchange, and influence. Such a text may be visibly or invisibly colonized by modes of communication and transmigration, trafficked by many discordant bodies—a battleground to a hegemonic play of voices. By code-switching between one interface and another interface, one tongue and another tongue, one script and another script, such a text may choose to dis-identify from or re-territorialize its performative utterance, speaking and “making speak.”

My first thought was “Whoa! What are they feeding them at Naropa!” Just kidding. What I really thought was that Alysha had articulated exactly what I felt in Padcha’s work–and what I wanted to create in my own work. It spoke to me. The essay continued:

As the daughter of an immigrant, and as a queer, transgendered performing artist of mixed race, my desire is to communicate the complexity of bordered bodies living within cultural borderlands. Constantly translating, mis-translating, transliterating, or transcribing, language becomes a border and also the means by which one can cross. In a state of passing, language dons many forms of drag in order to inscribe a transversal, in-between space for survival. As this manifests in my own work, I am interested in other writers who wrestle with two or more languages in their texts and how these might also function as multiple genders or cultural codes. Within a lineage of contemporary women writers of color writing across and/or between multiple languages, I will explore the politics of translation, mis-translation, transliteration, and transcription in the work of Thai writer Padcha Tuntha-obas.

At the time, I was editing Achiote Press and thought it would be cool to publish Alysha’s insightful essay alongside some new work from Padcha. I wanted our readers, many of whom were interested in polylingual poetry, to be familiar with these two writers.

The result was a chapbook called “Across and Between the Void,”  featuring the essay plus a series of Padcha’s poetry titled “Void.” The poem ends:

in this, here is silence as such, seeing

what’s heard as itself; this is the

shadows of absences that make presence;

of course, this void, there one seeks, there

Sometime after that publication, I met Alysha for the first time, who had moved to the Bay Area. Which is to say, I met Jai Arun Ravine for the first time because Alysha had transformed into Jai. Although I didn’t see Jai often, I enjoyed it when we crossed paths in the Bay Area literary scene. A particular fond memory was at a Small Press Traffic reading, held at CCA in Oakland. Jen Hofer, a good friend and wonderful poet, was one of the readers. There was some technical difficulty and the reading started a little late, but I didn’t mind at all because Jai and I were having a great discussion about something.

Maybe it was about Jai’s project The Spiderboi Files, a series of visual-art-poetry. The main character in these poems is Spiderboi, ” a character that draws from the power of the Spider and the Web as well as the popular Spiderman, a young man bitten by a Spider (a symbol of creative, feminine energy) and thus transformed.” This archetype became a way for Jai “to explore gender transition and gender transformation in relation to the desire to be fully embodied” (from the project’s website). This exploration is heightened, or perhaps embodied in the form of the project itself. The poems are inked onto panels, ala graphic novel and “Choose-Your-Own-Adventure” novels. Again, according to the project’s website:

I wanted to explore the idea of “choice” in relation to gender (versus sexuality) by placing that choice in the hands of the reader in the exact places in which those choices were difficult for me….The result is a living document of my first year living in San Francisco and identifying as trans. Through poetry, spoken word, graphic novel, web comic, and hand-sewn chapbook, the web of Spiderboi is the force-field a gender-variant person must build to envelop themselves in the strength that allows for change, individuation and transformation.

I loved this work so much I featured it in 2010 at the Poetry Foundation weblog here. I believe you can still order Volume 1 of The Spiderboi Files, which features 5 handbound poems for $7 here at the project’s website.

Sometime last year, Susan Schultz, editor of Tinfish Press, kindly invited me to guest edit two books for Tinfish. Because I love Susan and Tinfish for publishing such amazing poetry (I include my own book in that statement lol), I humbly accepted. I also accepted because I wanted to give two writers the opportunity to join the Tinfish family–an opportunity that has transformed my life in so many ways.

You guessed it: I asked Jai Arun Ravine to submit a manuscript. Ze said yes. And sometime later sent me hir manuscript. I was floored by how good it was. You could feel the echoes of Padcha’s work, as well as the work of Trinh T. Minh-ha, Barbara Jane Reyes, Gloria Anzaldua, Myung Mi Kim, and Theresa Hak Kyung Cha. Yet these echoes are woven into something completely unique. The book has narrative strands, lyric strands, documentary strands, polylingual strands–made into a web, made speaking.

To my delight, Susan informed me that the artist designing Jai’s book would be the same artist who designed my Tinfish Book: Ben Viwatmanitsakul–who also happens to be Thai. After taking into consideration Jai’s vision, Ben designed an amazing cover with an equally stunning and innovative interior.

And you’ve probably also guessed who wrote one of the blurbs. This is what Padcha had to say about the book:

In “แล้ว and then entwine” , what is real feels surreal and magical but believing in it happens as naturally as breathing.  Through ingenious physicality — be it in words, shapes, sounds, or forms — Jai Arun Ravine invites us to journey cross a few different kinds of ocean.  Geologically, the poet takes us inside a home located in two continents, and linguistically, the poet converses with us in a language that navigates and develops, simultaneously, between what is odd and familiar.  Though not all readers may understand every word in “แล้ว and then entwine”, they are sure to realize that this poetry is of superb engineering and genuine longing for a discovery of one’s difficult self.

Thank you Susan for this opportunity and for sustaining Tinfish all these years. Thank you Padcha for your amazing work and for blurbing Jai’s book. Thank you Jai for your poetry and bravery.

If you’d like to order Jai’s book, please go to the Tinfish website here. You can also read a few sample pages at that link. This is probably obvious, but if you are interested in Asian American Poetry, Experimental Poetry, Multi-lingual Poetry, Documentary Poetry, Visual Poetry, or Cross-Genre Poetry, you will dig this book. If you are interested in poetry that explores race, gender, sexuality, identity, citizenship, narrativity, and language, then you will dig this book.

So I’ll end with 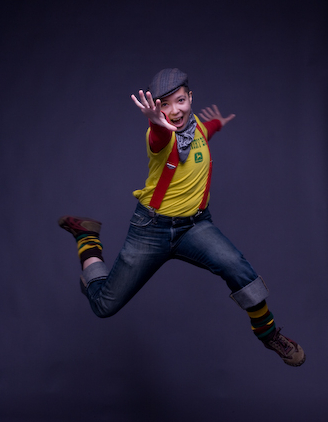 3) Two bios. The first is the bio that was used in the 2008 publication “Across and Between the Void,” and the other is the bio used in the Tinfish Book, 2011.

Alysha Wood is a graduate of Naropa University’s M.F.A. Writing & Poetics program and holds an undergraduate degree from Hollins University. A writer, dancer, and performer, Wood’s work appears in Galatea Resurrects, Feminist Review, Cliterature, Glimpse Abroad, and “Focus on the Fabulous: Colorado GLBT Voices.”  Wood currently resides in the bay area and is a contributor to In Dance, a publication of Dancers’ Group.

Jai Arun Ravine is a Thai American and luk kreung writer, dancer, video and performance artist. They received an MFA in Writing & Poetics from Naropa University. Ze is the author of the chapbook Is This January (Corollary Press, 2010) and creator of The Spiderboi Files. A Kundiman fellow, hir poetry, essays, reviews and visual art have appeared in Drunken Boat, Lantern Review, Journal of Southeast Asian American Education and Advancement, TinFish 18, Delirious Hem and Galatea Resurrects, among others.

and 4) Jai’s essay, “Behind the Poetry of แล้ว and then entwine,” at DOVEGLION, which gives you a behind the scenes look of how the book was written.